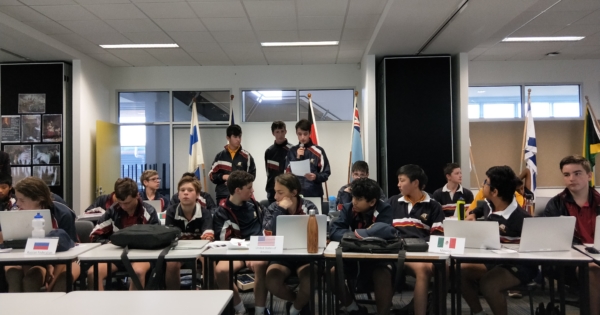 As a part of the end of year program, the Year 7 and 8 cohorts at Berwick Grammar School participated in a Model United Nations Assembly. This event required students to represent a designated country in a simulation of the real world United Nations General Assembly.

2016 Enrichment Captain Daanyal Saeed, former diplomat and US Peacekeeper, Alf Reina, and Rotarian John Caruana adjudicated this event. We were very fortunate to be able to draw on their years of experience and enthusiasm towards Global Politics.

Assisting in running the event were the senior members of the 2019 Enrichment Leadership Team, including Oliver Ward, Max Walton Briggs, Max McCahy, Benjamin Scarborough and Kurt Caddy. Trent Mitchell is also thanked for helping to organise the technology used in this event.

The recent expansion of this program to include the general student body was notably successful, and it was incredible to witness the sheer quality of debate from students of such a young age. They were grappling with very difficult interdisciplinary content- requiring research in the fields of politics, geography, sociology and history. Students were placed outside of their comfort zones, as they stood up and spoke passionately on behalf of their countries on the use of Weapons of Mass Destruction and the flow of refugee and asylum seekers throughout the world.

Both year levels are to be commended on how seriously they took the exercise, and all students are to be congratulated on their individual success. Congratulations particularly to the boys who represented The Democratic People’s Republic of Korea, for winning Best Overall Delegation, and the Lebanese delegation for taking out the Peace Prize.