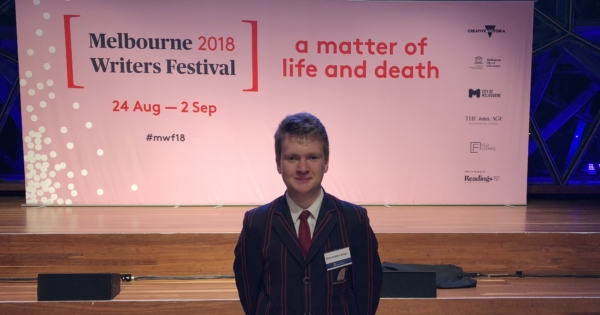 The John Button School Prize is organised by VCAA and awards the best essay on a subject concerning Australia’s future by a Victorian student who is in Year 10 to 12. This year Berwick Grammar entered two essays into this competition.

As a feature of the Melbourne Writer’s Festival, Max was publicly acknowledged by an MC in terms of the essay he had written, at Deakin Edge in Federation Square. He was congratulated by a number of the judges for the excellent quality of his essay. Significantly, both the winner and runner up were Year 12 students, and they were very complementary of Max’s essay given that he is a Year 10 student.

Max was also invited to a formal reception at the Duke of Wellington following the event. Here he met with John Button himself and received some further feedback on his essay.