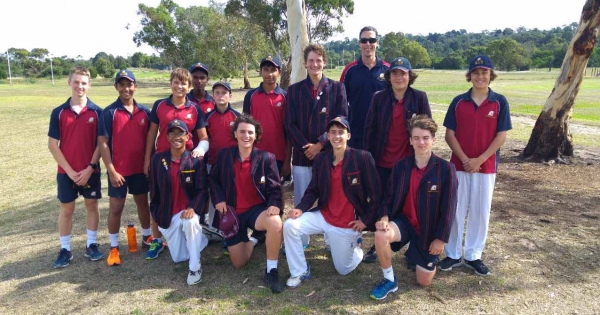 After losing only one game for the season and finishing second in our pool, the intermediate cricket team ventured to Baxter Park in Frankston to play a cross-over final against St Peter’s West who finished second in their pool. After winning the toss and electing to bat we got off to a flying start with opener Sam Curtain hitting 20 runs off the second over to see our team reach 27 runs from the opening 2 overs. The St Peter’s West bowlers fought back in the middle overs and after Sam Curtain was dismissed for 27 runs and Mitchell Hughes 12, no other top or middle order batsman reached double figures, meaning we were staring down the barrel of a very low total that would be tough to defend. Luckily for us the BGS ‘tail wagged’ with Mason Bursill making 10 and Yaseer Syed 15 not out to bring our total to a very defend-able 104 from 20 overs. The second innings started well for St Peter’s West with one of their opening batsman making 32, and when another batsman from their middle order made 37 all looked lost. Whilst our pace attack of David Charman, Mitchell Hughes, Sreerag Sreekumar and Mason Bursill battled hard they were no match for the opposition batsmen and a defeat seemed inevitable. Captain David Charman then turned to spin and with Harry Sharlassian taking 4 wickets and Sam Curtain 2 thanks to some handy glove work from Riley Clark, we were able to cause a lower order collapse which saw our opponents fall 6 runs short of victory. St Peter’s West were bowled out for 98 runs from their 20 overs and BGS won the cross over final, giving us third place overall from the two pools combined.