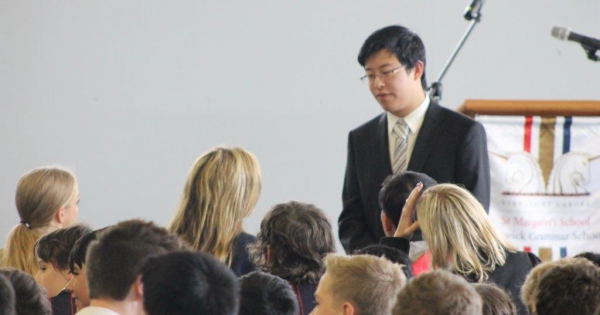 Berwick Grammar School held its first ever High Achievers Assembly this week, with Alex Jin (BGS Class of 2016) and Jake Templar (BGS Class 2016), accompanied by family and friends, representing themselves and all our successful VCE students, including the other High Achievers.  Alex, a former House Captain (Battye),  is about to start his Monash course in Pharmaceutical Science/Chemical Engineering at the Parkville Campus, and Jake, who was our Dux and former School Captain, is moving to Bendigo to begin Dentistry at La Trobe. Both young men have achieved their dream pathways, and are manifest examples of the importance of self-belief, a balanced life as a student, the support of family and staff members, and that important value in our suite of values: determination.  Jake gave an eloquent and honest speech directed to all boys about how he managed the focus on his studies during his VCE years, balancing his sport, his broad school involvements, his community life beyond school, his family and friends, and his leadership roles during those important years.  The learning skills and study habits they have grown at Berwick Grammar will stand them in good stead as they embark on their tertiary journey, but the fine young men they have become is always part of the hallmark of a great independent school education. Alex and Jake are great models for all our boys.

Other achievements that deserve mention this year include Ashley Chandrasinghe (Year 10) being selected for the SSV U/15 National Championships in Brisbane in April as an elite Victorian cricketer; Kash Gaitely (Year 12) who spent a fortnight at Australian National University in January at the highly competitive residential school for the Mathematically Gifted and Talented; Kaelen Dekker (Year 11) who has designed a free App, Crowd Saviour, to reduce critical response times for cardiac arrest emergencies; Noah Kent (Year 12, this year’s School Captain) who has been accepted as a member of the Country Fire Authority team at Beaconsfield; Couper Gross (Year 12) who has obtained his private pilot’s licence and is moving on to securing his commercial licence; Jacob Crozier (Year 12) was selected and swam in the Victorian Age Championships for Swimming, against an older age group, and performed very creditably; Leo Terray (Year 8) completed Eighth Grade Piano in Year 7 at the end of last year, and is now our accompanist at assemblies; three students were selected from the 2,500 applicants as ballkids at the Australian Open, Caydn Lane (Year 9), Will Hutcheon (Year 8) and Ainsley Kennedy (Year 8).  We look forward to celebrating the many other achieving students at Berwick Grammar as the year unfolds, including those who quietly get on with the business of supporting their peers and the various activities and events, in all sorts of ways, as leaders or as reliable and steadfast members of the school community.

This has been a great first few weeks, and some richer glimpses are offered here from others, reporting on what they have been doing.  Avanti, Berwick Grammar!