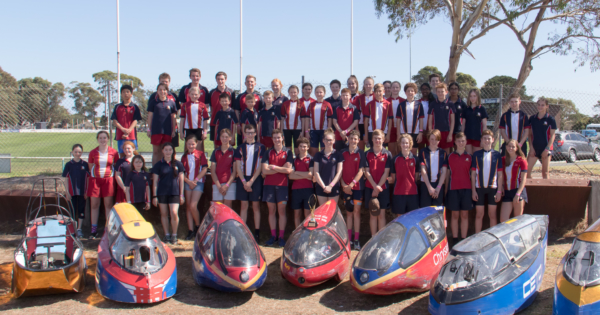 The St Margaret’s and Berwick Grammar School HPV and Cycling Squad had a successful weekend competing in the first HPV (Human Powered Vehicle) event of the year, the Wonthaggi HPV Grand Prix.

Our boys were represented in all five of our senior teams competing in the 24 hour event.

From Year 7 and 8, Jamie Elfick, Ashton Keramidas, Tallis Pritchard, Jack Scarborough, Samuel Templar, Bill He, James McCurdy, Cooper Webb and Tully Webb represented the boys in Zeus and Ceto. Both these teams performed well and finished in the top five of their category.

Year 10 and 11 students Trent Mitchell, Callum O’Connor, Max Walton Briggs, Oliver Ward and Connor Beck made up the male members of the Chrysaor team. They had a fantastic race and battled throughout the event to finish first in class.

River Dixon, Jordy Graziano, Rylan Hall, Evan Johnson, Miller Marks-Boulton, Clare McCurdy (SMS) Sam Thompson and Lachlan Webb competed the event in PerZeus. They were unfortunate to have a mechanical issue which had them off the track for over 37 minutes. However, once back on the track the team persevered and made their way back from sixth in class to finishing the race in second place.

Thanks to the support of all the students and their families who participated in the event. Our next HPV event is in May. If your child is interested in participating in the program please don’t hesitate to contact me.