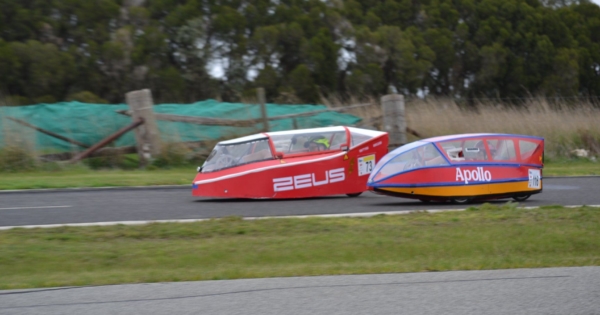 HPV Success in the final round of the Victorian HPV Series

The Human Powered Vehicle (HPV) squad competed in the final round of the Victorian HPV Series at Casey Fields. We were fortunate to have over 40 parents, friends, supporters and former students come to the event and visit the 54 student strong squad in action throughout the six hour event.

We achieved some fantastic results in the final round of the series which saw St Margaret’s and Berwick Grammar School as the leading school in the series.

Our open team was made up of Lachlan Webb, Sam Thompson, Clare McCurdy, River Dixon, Jordy Graziano and Rylan Hall. All rode exceptionally well to bring their vehicle home in third position in the category. Overall, they were award equal second in the overall series points. PerZeus was also competing in this category and rode a competitive race to come home in seventh place. The team was comprised of Ovin Jayawardana, Connor Beck, Trent Mitchell, James Agahi, Max Walton Briggs and Bill He.

The next HPV event is the Energy Breakthrough in Maryborough at the end of November.