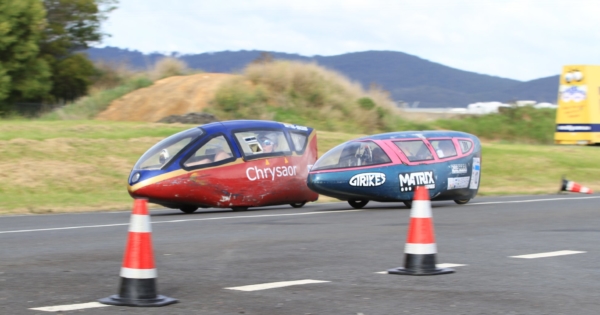 The St Margaret’s and Berwick Grammar School HPV & Cycling Squad entered 10 teams into Round two of the Victorian HPV Series. 60 students participated alongside 12 former students and parents, bringing our total number of participants to 72!

Our boys were represented in five of our senior teams competing in the six hour event.

Jordy Graziano, Rylan Hall, Miller Marks-Boulton, Phoebe Thompson (SMS) Sam Thompson and Lachlan Webb competed the event in PerZeus. They rode hour long stints in the vehicle and had a relatively trouble-free run to finish a well-deserved first place in the Open Category.

Year 9, 10 and 11 boys Bill He, James Wang, Ovin Jayawardana, Callum O’Connor, Max Walton Briggs and Ben Bryant raced well in Cassi, finishing the race in ninth position in the Open category. Trent Mitchell, Oliver Ward and Connor Beck made up the male members of the Chrysaor team. They had a fantastic race and battled throughout the event to finish third in class.

Thanks to the support of all the students and their families who participated in the event. Our next HPV event is in August. If your child is interested in participating in the program, please don’t hesitate to contact me.