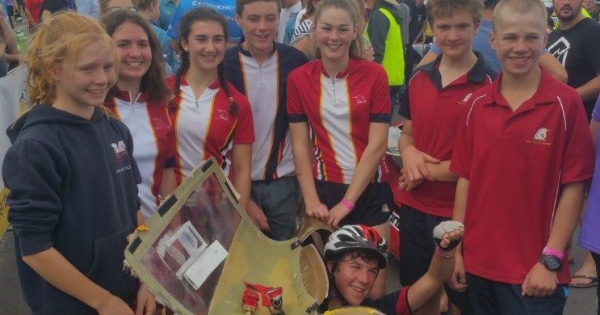 Just to make things a little more difficult for the HPV team, the Wonthaggi HPV event was run at the same time as the Victorian Interschool Cycling Series event. The result of this was 17 of our best riders competed in two very tough races on Saturday, then jumped straight into their parents’ cars to head for Wonthaggi where other members of their teams had been riding for four hours (with twenty more to go). Once again our level of participation was huge with seven teams of students and three teams of parents and past students. The weather varied from pouring rain and gale force winds to a beautiful autumn day on Sunday. These conditions tested our squad who were camping and self-catering but as always the wonderful volunteers helped make it a fantastic weekend. The cooperation between so many people from extremely young through to grandparents is something for which our squad is renowned.

In the actual racing we saw many new, young riders displaying great skill and endurance and teaming with their more experienced team members. The three Junior teams, under the supervision of our past students, were wonderful and improved so much throughout the event. In the Middle Secondary category our team of year 7 and 8 riders had a tremendous battle with Eaglehawk SC which got down to one lap difference with forty minutes remaining. The group in Chrysaor fought it out all the way to the end to record a memorable victory. Our other team in this category, Ceto, also had a great race to come in third. The Open Boys category was filled with many powerful teams and our boys in PerZeus had an excellent result to come second. In the Senior Female category our girls were so professional in the way they prepared themselves and rode. They blitzed the opposition to win by one hundred laps and have now, since they started in 2005, raced fifty-one times for forty-four victories which is a record that no other team has ever come anywhere near. Finally, it was up to the Community teams made up of ex-students and parents. Zeus came in a creditable sixth, Electra was third in the veterans’ category and the highlight was the Scorpius team which is now a really strong combination. They were overall winners and have now won two times out of two races this year.

It is with great pleasure that we are now able to announce that we have won the Victorian Interschool Cycling Series. We will again receive the Simon Gerrans trophy – a hotly contested trophy which many larger schools have tried their best to take from us this year.