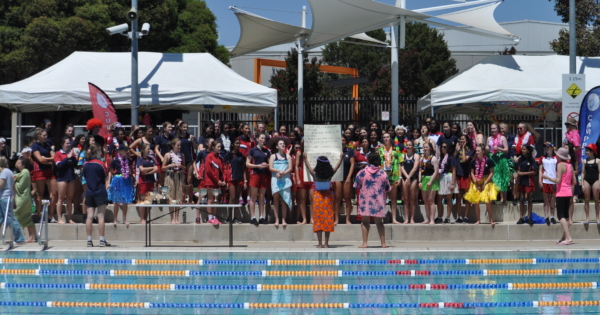 The St Margaret’s School House Swimming Carnival was held on Friday 1 February at Oakleigh Pool and what a way to begin the year. The weather was perfect, House spirit was high and the competition in the pool was fierce.

The day began with the Open 100m Freestyle event to determine the fastest girl in the school. Congratulations to Phoebe Sinclair of Year 12 Cunningham for taking out this honour.

Each House had their respective themes on display with costumes and chants and by the end of the day, Gipson House were adjudged the House with the best spirit and were awarded the trophy. Congratulations to other trophy recipients including Mikaela Battin of Year 10 Gipson who received the Consistent Endeavour trophy and Claudia Eibl (Year 9 Cunningham) and Chloe Liew (Year 7 Cunningham) who were joint recipients of the Individual Champions trophy for the highest individual points on the day.

When the overall points were tallied Cunningham came out on top and graciously received the trophy from Mrs Jenny Arnett, mother of our 2019 Swimming Captain Sarah Arnett. Girls from all Houses should be extremely proud of their efforts at the carnival as well as the teamwork and spirit shown on the day. Thanks to all who made the carnival a success.