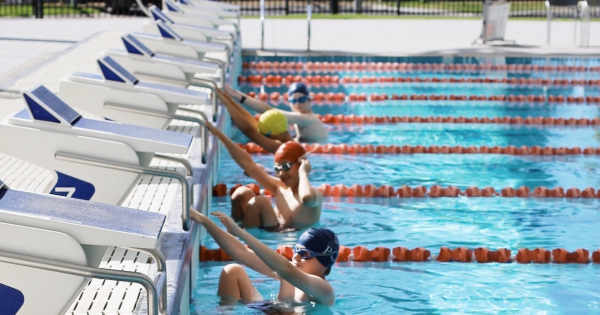 Last Wednesday 15 March saw all Berwick Grammar School students head into the Melbourne Sports and Aquatic Centre for the annual BGS House Swimming Carnival. Despite a late arrival due to traffic congestion, the carnival kicked off to a great start. The spirit of each House was lifted to a new level with the posters and decorations displayed and the costumes worn by their Year 12 students.

There were some outstanding individual performances on the day. Jacob Crozier and Will Morgan of Forsyth, Fletcher Kaintz, Matthew Merrilees, Ashley Chandrasinghe and Aidan Ferreira of Richards and Rhegan McEwen and Connor Radings of Battye all earning multiple individual victories for their respective houses.

In addition, three BGS records were broken on the day with Richards star Fletcher Kaintz breaking both the Butterfly and the Individual Medley records for the under 13 age group, and Battye’s Armaan Kalia setting a new record for Butterfly in the under 15 category.

From a team perspective it was an evenly fought out contest with less than 100 points separating the Houses which finished first and third on the day.

Whilst Battye had fantastic leadership from Mr Rodwell, Harkireth Calais and Sports Captain Joel Laycock, and won two of the three House chants competitions they came in third place with a very respectable 1875 points.

Forsyth led by the enthusiastic Ms Vrakatselis and ‘super-fish’ Jacob Crozier had great success in a number of races, however, could only manage 8 points more than Battye at 1883 in total.

And finally, Richards House, who under the careful guidance of Ms Cameron, Peter Jennings and Kash Gaitely scored 1943 points to secure the BGS House Swimming Trophy for the third year running.

A great day was had by all, and a big thanks to all students who participated enthusiastically and all staff who made the day possible.