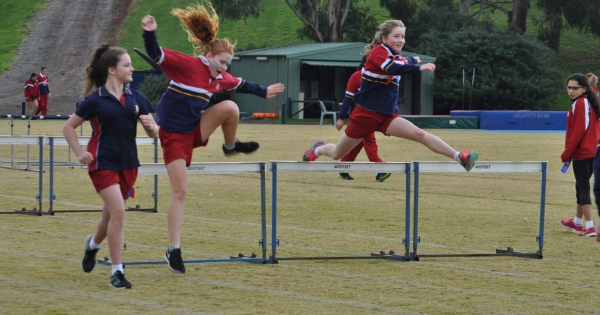 The last Wednesday of Term 2 saw the running of the House Athletics Carnival for 2017. The day provided challenges right from the start with persistent heavy drizzle delaying the first event, but in doing so, it provided valuable time for House Captains to practice their motivational chants.

The House Athletics Carnival brings points previously won on Athletics Standards day, which was completed earlier in the term, so that they can be added any points won in this Carnival.  The greatest grand total of points then determines the overall champion Athletics House.

The first event as always was the Open 100m championship where Isabella Ronald of Gipson House provide too fleet of foot for her rivals.  The fastest 1500m runner from Years’ 10 to 12 was Olivia Weston from Cunningham, whilst the Year 7 to 9 champion was Jessica Day of Gipson House. The fastest 400m of the day belonged to Shae Jones competing for Campbell.

Despite the sometimes wet and cold weather, the enthusiasm and determination of the girls was fantastic. Many last minute substitutions ensured that almost all races had a full field and that it would be ability that ultimately decided who would win.

The most spirited House on the day was judged to be Campbell, whilst the Standards competition winner was announced as Cunningham. Gipson proved to be the most Athletic House on the day, but when all points were added together it was Cunningham that took out the trophy as the best House for Athletics in 2017.

All House Captain did a tremendous job in ensuring that events were filled, spirits were high and they certainly led by example. Mrs Bright, Mrs Gurney and Mrs Atkins also worked extremely hard all day to get the best from their girls of their Houses and I would also like to thank the SMS senior staff for ensuring that the day run smoothly and was enjoyable for all the competitors.