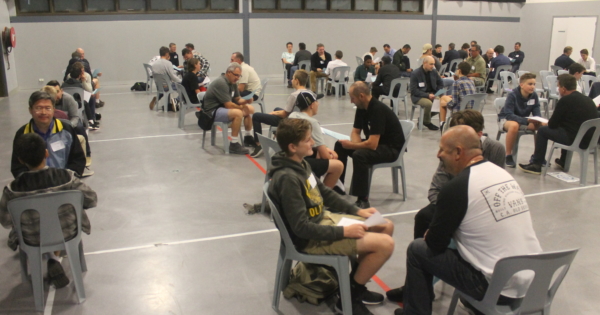 Two events of the past week have really stood out to me in defining what is special about our Berwick Grammar School community and I think worthy of sharing.

Last Thursday our School paid respects to the service and sacrifice of our forebears through our ANZAC Commemoration Service. Prior to our Muster, where the boys assemble in House Groups for uniform inspection, I had challenged the boys to ensure that they were immaculate in presentation. The manner in which our boys assembled and wore their uniform was a great source to me. We are continually trying to raise our standards in all elements, from small to large to ensure that excellence is our aspiration. It was a delight to enter the Assembly to the inspiring beat of our Drumline before Mr Mark Mason and the Senior Concert Band performed the national anthem of New Zealand. This was particularly poignant given the presence of our exchange partners from The Scots College, Wellington. An extremely dignified and respectful tone was achieved and I thank Mr Mark Dunstan for his address on the 5th RAR in Vietnam. We were also treated to reflections by Trent Simpson, Chester Wilmot and the presentation of the ANZAC Prize to Januk Gamage for his written exploration of the meaning of the term. I was immensely proud of all boys and our broader community for the manner in which they presented and performed at the event. The sound of silence was only punctuated by the outstanding manner in which our Performing Arts Captain, Aaron McDonald played the last post.

Earlier in the week, we also launched the inaugural Time & Space evening for Fathers and Sons. Hosted by Mr Bill Jennings, the evening promotes authentic conversation between the generations on the importance of relationships. We had over 30 Dads/Mentors in attendance which was an outstanding result for a new initiative. Importantly, these dads and boys were well served by a committed and dedicated group of staff members who facilitated the small group discussions. I felt very fortunate to witness the transformational events of the evening, where a great deal of positive emotion permeated the room. The feedback received to date highlighted the importance of such occasions with both boys and their fathers as ‘raving fans’ of the outcomes of the evening. We are indeed fortunate to have Bill Jennings on Wednesday 23 May host the second part of the program, the Mothers’ and Sons’ event which has already attracted a very healthy response. In fact, we are well and truly on target to put the dads to shame with the number of attendees.

Both these events highlighted the strength of our community. We are blessed to be members of a community that is both innovative in its approach to honouring and developing relationships but also one which celebrates and commemorates the past as the foundation of our identity. The manner in which both these events were engaged with, reveals much of the special qualities of Berwick Grammar School.