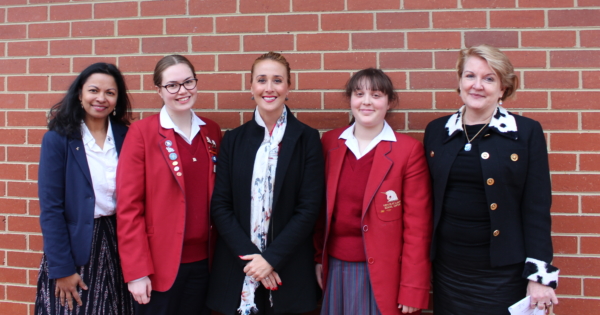 The first weeks have been busy and fulfilling. We welcomed 11 new students to the school as well as a number of international visitors. We celebrated the ‘Outstanding’ rating received by our ELC, the National Educator Award finalist status and Ms Louise Cook’s (BGS) recognition as one of the top 20 educators in Australia by the Australian Council of Educational leaders.

According to the Australian Bureau of Statistics, the 2016 Census of Population and Housing showed that more than a quarter (26%) of Australia’s population (6,163,667 people) were born overseas, up from 25% in 2011. This continues a trend that has seen an increase in the number of overseas-born people living in Australia since the first Census in 1911. Of the overseas-born population, nearly one in five (18%) had arrived since the start of 2012.

The ten most commonly reported countries of birth for those born overseas were:

While the most common birthplace for those born overseas remains England (15% of the overseas-born population), there has been an increase between the 2011 and 2016 Censuses in the proportion of people born in China (6.0% to 8.3%) and India (5.6% to 7.4%). The proportion of those born in New Zealand has decreased over the same period, dropping from 9.1% to 8.4% of the overseas-born population.

Apparently, as of 2015, Australia had the 9th largest number of overseas-born people, higher than both Spain (10th) and Italy (11th).1 While the United States of America had the highest total number of people born overseas (47 million or 14% of their population),2 Australia had a higher proportion of overseas-born people, at 26%. Australia also had a higher proportion of people born overseas than our neighbour New Zealand (23%) and Canada (22%),3 other countries founded on migration.

In 2016 nearly half (49%) of all Australians were either born overseas or had at least one parent who was born overseas.

What does this all mean? For us at St Margaret’s and Berwick Grammar, we operate in an increasingly diverse community. In my just over 2 years, the proportion of families in Berwick from a non-English speaking background has increased by approximately 5%. For our students it means they have an opportunity to learn how to interact and communicate successfully with those that are different to themselves.

On-line lives of children
Families may recall we ran a Unicorn Series earlier this year on the on-line lives of children, the opportunities and challenges. It has come to our attention that many families still allow phones/iPads and other electronic communications to stay in the child’s bedroom overnight. We would ask that ensure this is NOT the case and that you actively engage with your children in their on-line lives. If they do not want to share with you and they are in Junior School or the middle years, it is a sign that something may not be right. We would encourage all families to access support information on Cybersmart. Cybersmart is a national cybersafety and cybersecurity education program managed by the Australian Communications and Media Authority (ACMA), as part of the Australian Government’s commitment to cybersafety. The program is specifically designed to meet the needs of its target audiences of children, young people, parents, teachers and library staff. Please see https://www.esafety.gov.au/parents for more information.

2020 Senior School Captain Elections
Both Senior Schools have commenced the process for the selection of 2020 Captains. Please see the Head of Senior Boys/Girls or the Vice Principal for further information.

Parent Code of Conduct
As mentioned recently, new regulations come into place in 2019 from the VRQA (Victorian Regulations and Qualification Authority) that emphasise the importance of clarity and transparency regarding aspects of enrolment, assessment and other key areas of operation. A key part of the requirements is the inclusion of a Parent Code of Conduct in School documentation. The Parents’ and Friends’ Association is currently looking at the code. A draft version of the Parent Code of Conduct is available on the website https://www.stmargarets.vic.edu.au/About/Parent and Childsafe Policies.