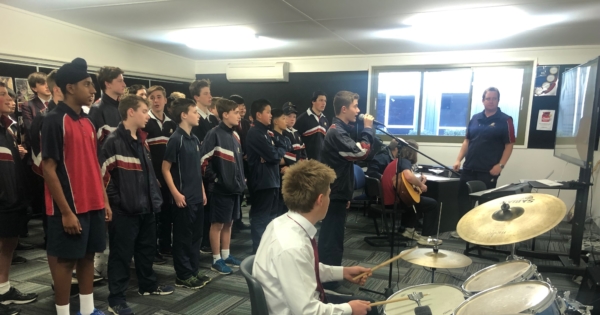 Recently, I attended the International Boys Schools Coalition Conference in Montreal – a conference whose theme was all about the crucial role of the Arts in Boys Education.

This week, as I watched our boys engaged in so many creative endeavours, I saw once again how important the Arts are as a way to allow boys to express themselves in ways that are healthy and honest.  I saw the best of our musicians and vocalists perform in the Senior School Concert; Australia, This Is Your Song, and show the local community just how talented they are.  The BGS Choir was one of the highlights of the night for me, as was the combined opening number where boys and girls performed John Farnham’s iconic ‘You’re The Voice’.  What better message to our youth about the power of performing.

In addition, every boy is now working hard for the House Music Festival coming up on September 9th.  There are boys in House Bands working to rehearse and even arrange the 80s music that is this year’s theme and every boy is involved in the House choir.  I haven’t managed to spot and of the drama performances just yet – these are clearly top secret, although I have heard Richards – current House Champions are looking to make this their fourth House Event for the year with a secret video project.

Beyond the Performing Arts, there are also boys involved in the Fine Arts, and no doubt many of you are also following the progression of some of the work of our young men in VCE Design Tech.  In particular we have been showcasing on Facebook the work of Daniel Peart, whose Design Tech project embodies the personal connection a boy can have to the arts.  This beautiful table he is designing, with an eye-catching blue resin feature, is built from a striking piece of wood that was grown on his family’s property.

BGS also boasts photographers, sketchers, website designers and more.  And word from the Heads of House is that future House Performing Arts Festivals will have an even greater focus on other aspects of The Arts.  It’s tremendous to see Berwick Grammar School leading the way in this area.