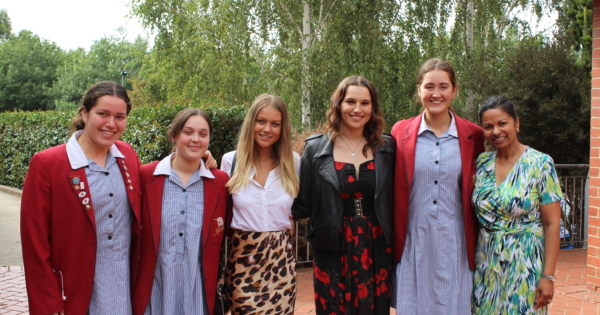 There exists a video, which depicts a group of 7 year olds in a coeducational classroom. They are asked to draw a firefighter, a surgeon, a fighter pilot and a nurse. Every child drew a male for all, but the nurse. What would you have drawn?

Last Friday was International Women’s Day. While last week saw the continuous celebration of the acknowledgement and support of women worldwide, St Margaret’s girls had already been considering what it means for them to be a woman, in this modern world. They were presented with questions such as; ‘If you fear no fear, what would you do? What is the most important character trait a person should possess? The answers were not only thought provoking but also challenging. The depth of responses demonstrated that being a woman entails so much more than can be imagined. We heard from two guest speakers on the importance of embracing opportunities, shunning the ideals that the world places on women and the importance of persistence in achieving your dreams. The fearless girl statue that stands proudly at Federation Square was mimicked by our entire school, as they stood united and proud at the conclusion of our assembly.

One evening, I attended an alumni speaker seminar at Monash University, which highlighted three woman, all with established and thriving careers in education. Each was asked questions regarding their personal journey. The common theme was ‘Take responsibility. Feel the fear and do it anyway’ (F. Reddin) All of these women had faced a time where they felt intimated for being female. However, the point being made was that here they were, proud and fearless. All made mention of supportive males along the way; the world is thankfully changing.

My week ended with a conference sponsored by Westpac bank. In a similar fashion, three women were asked to recall their journeys. Interestingly, the first speaker, a self-made entrepreneur saw a need to instill a moral conscience in young children. Research shows that children, who were not taught the difference between right, wrong, and societal accepted behaviours prior to the age of seven, would continuously struggle with these decisions throughout their lives. Thus, the birth of the Primary School life skills program.

The second speaker, a mother of two boys took an interesting stance. She felt that it is her duty to ensure that her boys are part of the solution and not the problem, of gender equality. She vowed to do all she could to bring up her boys to respect and treat everyone with respect, despite their gender. This reminded me of what Dr Middleton is doing with the  ‘Growing Good Men’ campaign at Berwick Grammar School.

The final speaker was the most compelling. At the age of 16, she was Carer for her younger brother who suffered a multitude of medical conditions. Soon after, her mother was diagnosed with cancer and she was overwhelmed with the sheer weight of both her brother’s needs and now her mums. Catherine decided at this young age to start her own business. Little dreamers provides programs for young children who have to assume the role of Carer. Catherine has since received the Order of Australia for her contributions to the growing issue facing Victorian youngsters. Catherine will be coming to speak to our girls in the near future about the power of self-belief and a life of purpose.

In closing, I want to leave you with these thoughts; Let us take the ‘luck’ away from the future, for our girls. Let us work together to create a world of optimistic opportunity for all, in a world, which is, label less. Ambitious I know, but believe me when I say I see this happening each and every day at St Margaret’s School.