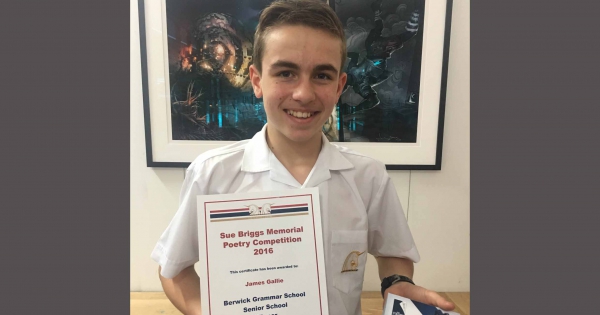 The Berwick Grammar School boys have been provided with numerous opportunities to enrich their English skills in recent weeks, and it has been wonderful seeing them take advantage of the opportunities to extend their communication skills in a variety of ways.

Towards the end of Term 3, boys were invited to take part in the annual Sue Briggs Poetry Competition. The theme for this year was ‘Stormy Weather’ and alongside winners from St Margaret’s School, Will Morgan of Year 10 and James Gallie of Year 7 were awarded the best prizes in their age category. Special mentions were also made of Shishir Kulkarni in Year 8 and Benjamin Inskip of Year 10. James took a particularly unique approach to the task – and his poem is attached to the end of this article for your enjoyment.

George likes to think there is an imaginary world
Where his boat is on water and gets swirled and swirled
The duck was a bad guy; the bad guy was he
Humans off the boat were his most favourite treat

The boat was in storm that showed great danger
But there was something in the distance that couldn’t be stranger
It was big, bold and looked very black
And when it closer it let out a quack

The duck was there, hungry as ever
He went for the man with shoes made out of leather
But just in time, mother saved the day
The citizens of the boat yelled “Hip-Hip Hooray!”

The plug was pulled out and drained was the water
Luckily the man was saved from duck-slaughter
Little George was dried and his pyjamas were on
Now this story is over, from what felt like a marathon