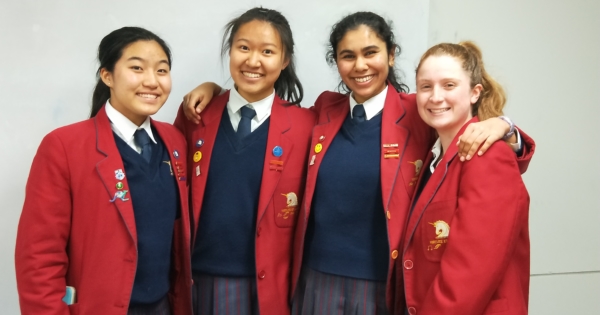 After remaining undefeated for the five rounds of the DAV Schools Debating Competition, our B Grade Team 1 (consisting of Sabrina Ward, Yebin Yang, Xingtong Huang, Jessica Elfick and Emily Ferdinands) progressed through to the Finals Playoffs.

Finals Playoffs for the DAV Schools Debating Competition were held on Wednesday 28 August at Haileybury in Keysborough. This round of the competition determines who will proceed to the Octo-Finals (top 16 teams in the Grade, in the Victoria-wide Competition).

These girls were fortunate enough to win this by a convincing margin of three points. Congratulations to both Yebin Yang and Xingtong Huang who were tied for Best Speaker. This same team had progressed through to this stage in last year’s competition but were unfortunately knocked out in the third Playoff.

These girls have worked incredibly well together this year, exemplifying just how much you can achieve with the right attitude, some effort and supportive peers. These girls serve as positive examples to younger debaters in the program, and they are thanked for the hard work and enthusiasm they have displayed throughout the entire year.

Best of luck to this team for the next round of the competition. Stay tuned to Campus News for updates!