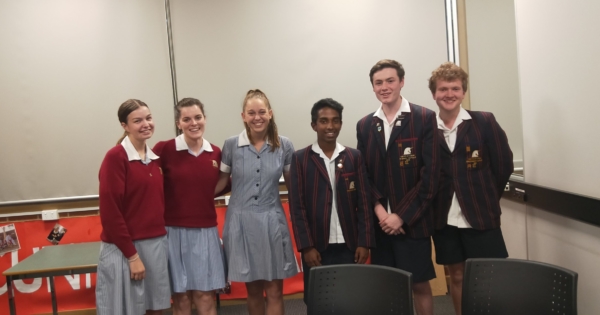 The first round of the DAV Regional Debating Competition was held on Thursday 5 March. This competition takes place over five rounds throughout the year and is an excellent opportunity for debaters of all abilities to develop their skills with collaboration, critical thinking and public speaking. St Margaret’s School are proud to host this competition for the Berwick Region.

This year, the debating program has again expanded, with a record 111 students participating between our senior boys and girls.

Student leadership is under the watchful eye of Sabrina Ward, and Max Walton Briggs. These Captains are ensuring a wider range of cross-campus activities throughout the year, while fueling historic rivalries between these two campuses.

Our boys’ teams suffered a lot of unfortunate defeats, though these were mostly were lost by a point or two. There were, however, some outstanding individual performances on the night (as well as a few solid wins). The camaraderie between debaters is particularly strong this year, with a lot of support shown particularly by the older boys.

The girls’ teams had a bit more success on average, and again there were many individuals who showcased some pretty significant potential.

We are excited to see what unfolds from this potential throughout the year, with many students potential contenders for Swannies, and a number of teams with reasonable chances of making it to Finals.