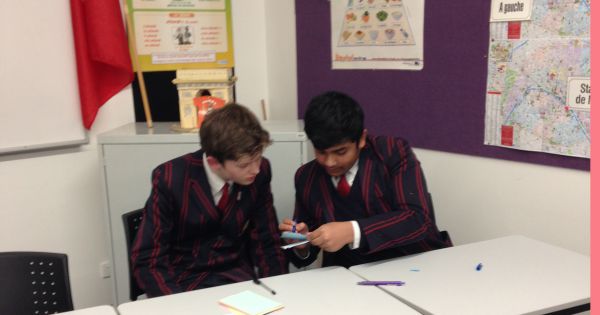 On Thursday 4 August, the final round of the Debaters Association of Victoria (DAV) Debating Competition was held at St Margaret’s. This was a particularly exciting and unusual round.

Due to last minute complications, one of our B Grade teams could not make it to the debate. This could have been a disaster, however we had two valiant D Graders (Ben Scarborough and Rasridh Islam) debating in B Grade, pushing their newly developed debating skills and actually taking out respectable scores against two Year 11s and a Year 12. This was particularly impressive, as the boys had less than 40 minutes to prepare for their first ever secret topic, while competing two grades above their level and far outside of their comfort zones. While they didn’t win this round on points, the team won on a technicality which forced the other team to forfeit. In any case, it was extremely impressive to see them compete in such a high grade of debating. The adjudicator said it was ‘the most unusual debate he had ever seen.’

Miller Marks-Boulton and Oliver Ward both took out Best Speaker in their debates. Our Enrichment Captain, Daanyal Saeed, also took out Best Speaker in his last ever debate for BGS. This was a great way to finish his prestigious debating career during his time at the school. Our Head of English, Lauren Cook, also came along to witness the A Grader’s final event.

Oliver Dillon, Miller Marks-Boulton and Gavin Li won against St Francis Xavier, in what the adjudicator called ‘the highest quality D Grade debate [he had] seen this season.’ All of the boys should be commended on their excellent preparations for this event and their performance throughout the year.