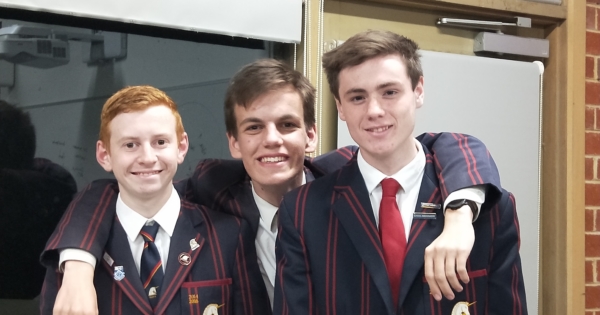 The fourth round of the DAV Debating Competition for the Berwick Region was held at St Margaret’s School on Thursday 14 June.

This round was reasonably successful overall, with more than half of our teams winning their respective debates. The development of the teams and the success they have enjoyed is a testament to the hard work of students, as well as the leadership from the captains guiding them. It has been incredibly heartening to witness the sheer amount of mentoring and support happening behind the scenes.

While this is something to celebrate, we would like to highlight the achievements of one team in particular. At the highest level of competition, A Grade, our sole team is so far undefeated, having overcome their peers at St Margaret’s, as well as their counterparts from Nossal (twice) and St Paul’s Anglican Grammar School.

These boys are in a perfect position to win the competition, and members of the team are in strong contention to win a prestigious and elusive Swannie Award.

We wish these fantastic debaters the best of luck, and thanks them for both their efforts, as well as the proud manner in which they represent our School. Congratulations once again to Kaelan Dekker, Oliver Ward and Justin Lake.