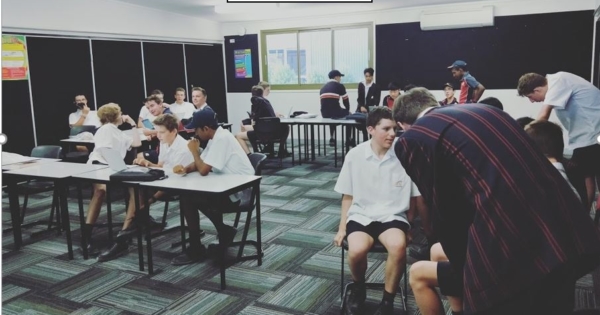 On Thursday 4 April, we enjoyed another round of DAV Debating at St Margaret’s. While not quite as eventful as the first round, it was a successful night overall.

Our A Grade Team, advocating that we should criminally prosecute companies that use sweatshops, won by 1 point, with Best Speaker awarded to Max Walton Briggs.

Due to an administrative error, B Grade Team 1 did not get to debate this round. Their debate will be rescheduled to a later date. B Grade Team 2 won by a significant margin (four points), and Trent Mitchell was recognised as Best Speaker for the first time. This debate saw the boys argue that the government should have access to private citizens’ encrypted messages. Unfortunately, B Grade Team 3 did not have much luck that night.

C Grade Team 1 won, defending the argument that we should abolish all political parties. Ovin Jayawardana was awarded Best Speaker. C Grade Team 2 lost by only one point, in what was a very close debate.

D Grade had a difficult round, with only one out of three teams securing a win. The topic for this debate was: “That all political parties should have quotas for female candidates.” With students as young as twelve in these teams, it was somewhat incredible to witness these young men competently debate such difficult political concepts. It leaves you with a certain sense of hope for the future.

We are looking forward to Round 3, which will be held on May 23 at St Margaret’s School. All members of our community are encouraged to attend.