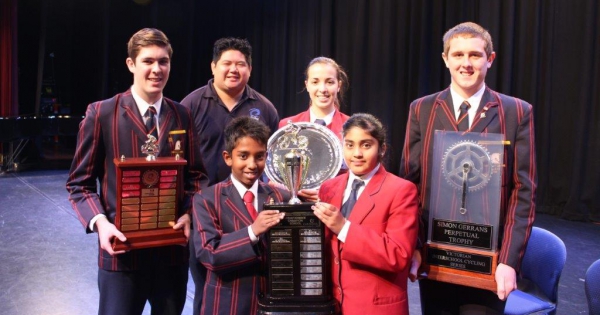 On Tuesday 10 May, we welcomed Mr Alan Mok from Cycling Victoria to Senior Assembly. Mr Mok spoke of the many events that the students had participated in throughout the year before presenting the HPV and Cycling Junior and Senior Captains with four major trophies.

Each year, there are two school cycling competitions organised by Cycling Victoria. The first is VSCC (Victorian Schools Cycling Championships) and this involves competition in two disciplines Road Cycling and Mountainbiking. For each discipline there are Zone finals conducted around Victoria and the State Championships held in Bendigo. Individual winners and place getters are recognised for each age group and total points are added for Zone and State finals to decide the winning school. St Margaret’s and Berwick Grammar won the State Champion School Trophy for both Road Cycling and Mountainbiking. In addition, the schools had eleven individual champions!

The second competition is the VICS (Victorian Interschool Cycling Series) and this is comprised of seven rounds of individual time trials, team time trials, hill climbs and criteriums. Once again individual winners for each round and the series are recognised and the school that scores most points for girls and similarly for boys both receive a trophy. The major trophy is the Simon Gerrans trophy to the school that scored most points overall in the series. St Margaret’s and Berwick Grammar won the series trophy for the girls plus the Simon Gerrans trophy for champion school.

Overall we competed for five major State trophies and won four of these. Congratulations to all the students involved.