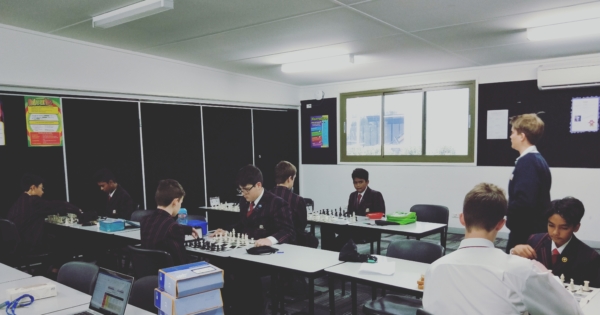 In an impressive display of student leadership, the BGS Chess Captain, Kurt Caddy, has begun the selection process to find his replacement for 2021. This student will serve as Vice Captain in 2020, while undergoing training by Kurt.

This rigorous selection process involves students putting in a formal application, regular attendance at meetings and events, as well as planning and facilitating their own Chess Club tutorial class before the end of the year. The professional nature of this process is a positive reflection of the leadership skills that this program develops, which reflects particularly well on Kurt’s evolving abilities as a leader in our school community.

Kurt was responsible for founding the Berwick Grammar Chess Club and we have seen this group of eager students flourish under his watchful eye. The results speak for themselves, with a significant improvement in our past performance at the recent Pakenham Inter-School Chess Competition.

In addition to setting up structures to keep the club running in his absence, he will also be integrally involved in assisting to plan the soon-to-be-launched St Margaret’s Chess Club. Kurt is thanked for the time, effort and enthusiasm that he displays in his service to the school, through fulfilling this important leadership role.

In other Chess news, an internal tournament is underway. Stay tuned to Campus News for an update on which Berwick Grammar boy emerges at the top of the ladder.