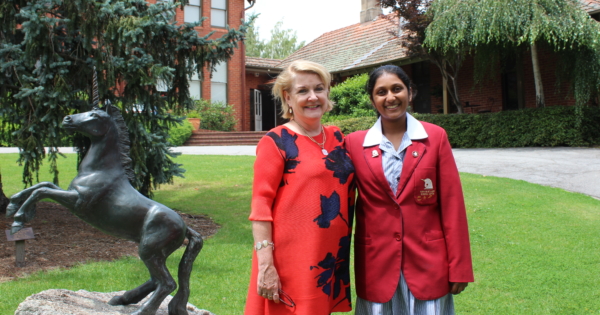 At St Margaret’s and Berwick Grammar School we strive to be our best selves, now and in the future, for the betterment of all humanity and the planet. In 2018 the students have worked towards achieving their best in all they do both inside the classroom and beyond. They have played sport, musical instruments, debated and worked towards demonstrating leadership of self and others. Most importantly our senior students have endeavoured to be good citizens and role models for younger students and in the broader community. We are proud of all our students and we wish them well as they move forward to take their place in the world demonstrating the CURIOSITY to know and learn through exercising COURAGE to do the right thing, CHARACTER to be one’s best self and RESPECT to live wisely and compassionately with others and the planet.

Jayarupi has attended St Margaret’s School since 2013. As well as being the 2018 Dux of St Margaret’s with an ATAR score of 99.35 she has had an extensive involvement in the school community and beyond. She was a 2018 School Co-Captain and in this role has excelled.

Like many high achievers she was an enthusiastic participant in a wide range of House activities such as Inter-House Debating, Swimming, Athletics, Extravaganza, Winter and Summer team sports and Cross-Country. Jayarupi was a regular contributor to the Debaters Association of Victoria Debating team and has represented the school from Year 8 to Year 12.

She has received Certificates of Academic Excellence on numerous occasions. In 2016, Jayarupi received the Monash Prize for Excellence and the JD Campbell Scholarship. In 2017, she received Academic Colours and the Queen Margaret Award in recognition of her overall academic excellence and significant contribution to the St Margaret’s School community. This year she received the Rosanove Award for Excellence in English and the subject prize for VCE French, History Revolutions and Literature.

Jayarupi has worked diligently to complete her VCE studies in Chemistry, French, History Revolutions, Literature, Specialist Mathematics and Mathematical Methods in 2017. She is to be congratulated on her effort and achievements. Jayarupi has been a most valuable contributor to the St Margaret’s School community and we wish her well in her future endeavours and her chosen field of law.