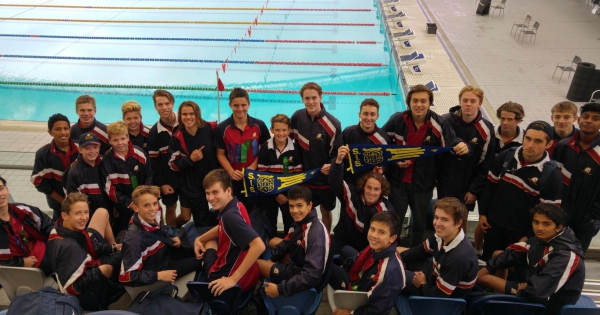 BGS MAKES A SPLASH AT DIVISION A SWIM CARNIVAL

Berwick Grammar School’s first ever appearance at the SIS Division A Swimming Carnival was a huge success. With 100% attendance from the students selected from our BGS Swim Carnival late last term, all teams went into the carnival unchanged so that we were at full strength for the big day. With Sports Captain, Joel Laycock and Swimming Captain, Jacob Crozier overseeing proceedings, our boys produced some amazing performances both individually and as a team.

Whilst all 6 year levels competed extremely well, it was the Under 13 (Year 7) and Under 14 (Year 8) teams who emerged victorious, claiming the SIS Pennant as champions of their respective year levels.

Our greatest team achievement, however, came by gaining second place in the overall boy’s shield. To get so close to Padua College who have not lost this title since 1989 was a huge effort and hopefully one that we can improve upon in years to come.

Matthew Merrilees of Year 8 led the way in the individual races, becoming SIS Champion in all 3 of his races, whilst Jacob Crozier of Year 12 was not far behind with 2 first place ribbons along with one second from his 3 events. Fletcher Kaintz of Year 7 collected one ribbon of each colour with a 1st 2nd and 3rd in his 3 individual events at his first ever SIS Carnival.

Overall it was a great carnival and the boys represented BGS extremely well on the big stage and have hopefully set the scene for a big year of carnival success ahead!