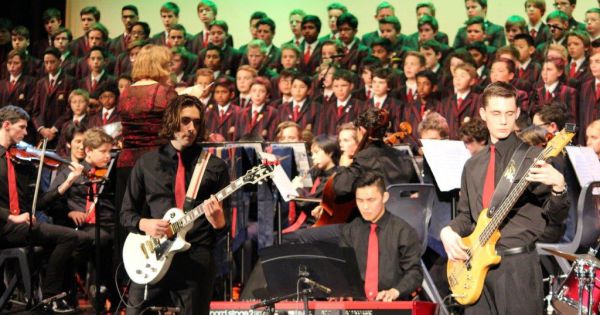 BGS In Concert 2016 was once again a highlight of the Performing Arts calendar at Berwick Grammar School. The night showcased the musical talents of the boys from Year 5 to 12. The Rosanove Auditorium was filled with family, friends and peers and they were treated to an entertaining selection of music from start to finish.

The BGS ensembles were a highlight of the program. The Senior, Junior and Year 5 Concert Bands involved all of the wind and percussion players from within the school whilst the Con Brio Strings, Vocal Ensemble, Guitar Ensemble, Big Band, VCE and Year 10 Ensembles, Drumline and Saxophone Ensemble presented a range of music from many genres.

The Opening and Finale, of course, featured the Berwick Blokes. This year the Blokes gave a strong rendition of the hit, Radioactive, featuring vocal soloists Pavan Mallawarachchi and Jesse Busacca, accompanied by Con Brio Strings. To conclude a wonderful night of entertainment the audience was treated to Toto’s hit, Africa. The amazing soundscape, using body percussion by the Berwick Blokes, brought rain to the auditorium.

The night was certainly a whole school team effort! Students were not only involved in the musical onstage items but assisted in program design, photography, backstage, lighting and ushering, whilst staff assisted in the supervision of students, lighting and backstage.

A huge thank you goes to the Classroom and all the Instrumental Staff whose ongoing enthusiasm and dedication to music education at Berwick Grammar School has enabled the boys to reach their full potential.

A wonderful night was had by all!