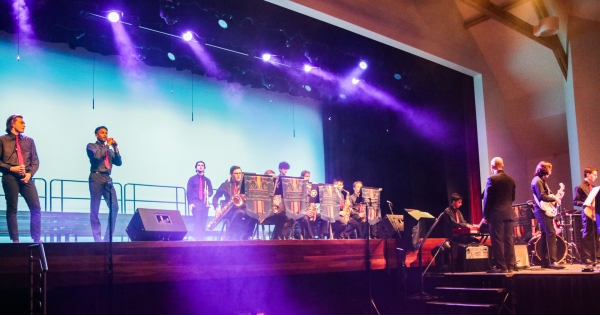 A most enjoyable evening was had by all those at the Rosanove Auditorium for the BGS In Concert 2017. A truly diverse array of music styles was heard throughout the night performed by the Performance Ensembles and soloists.

The evening began with a tribute to Stevie Wonder, which featured the Senior Concert Band, Con Brio Strings, Vocal Ensemble and soloists and of course the Berwick Blokes. This was a vibrant and energetic opening for the concert. This year’s soloists gave outstanding performances and congratulations goes to Declan Coleman, Sebastian Nugara, Gavin Li, Munir Kamil, James Agahi, Nahum Ridoutt, Aaron McDonald and Dylan Girotto.

The Year 6 Ukulele band was once again a big hit with the audience and their version of Never Gonna Give You Up was just delightful. The Year 9 Class Ensemble presented their arrangement of the contemporary song, Rather Be, which incorporated vocals, strings and the Cajon and the performance of Man in the Mirror highlighted the confident vocal ability of our VCE students, Pavan Mallawarachchi and Connor Boothman

To conclude, all performers were on stage to present the up tempo hit by Justin Timberlake, Can’t Stop the Feeling. An energetic and fun-filled performance was given by all.
Thank you to all those students and staff that performed or assisted in putting this show together. It was an amazing team effort!