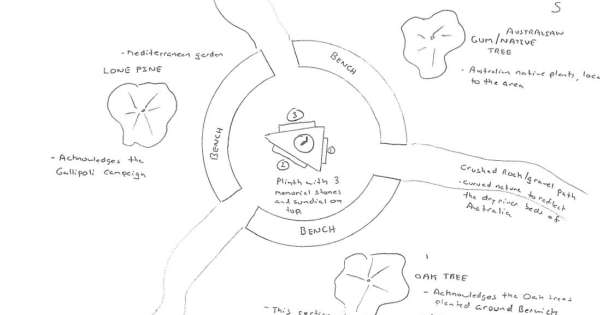 The application to the Department of Veteran’s Affairs has been successful in securing a grant of $5,408 for the Memorial Garden to be built at the Berwick Grammar School Campus. This one-off electorate-based grant has been provided by the Federal Government to commemorate the armistice that officially ended The Great War (later renamed WW1).

The memorial garden will have connections to the old Berwick Grammar School that served the Berwick area and the men who attended the school and died in action during the war. It will also have ties to the wider Berwick community and the battlefronts of WW1 that saw Australians in action. The following text gives a brief description of what it will look like.

At the centre of the memorial will be a triangular stone plinth with three plaques. The plaque that faces the east will be those who served and were killed in action. The sun will rise each morning on their names so they will be remembered for another 100 years. The second side will have a list of all those who enlisted from the old school. The third side will be dedicated to those who supported the project and opened the site.

On top of the stone plinth will sit a sundial that shows the places of conflict and the distance from Berwick to these sites. Surrounding the plinth will be a circular courtyard of crush rock with three benches made from interlocking blocks, similar to the colour and shape at ANZAC Cove in Gallipoli.

Three paths will lead into the centre of the memorial separating the benches. Each path will form the outline for three distinct gardens.

The first garden will be Australian with local flora, this will represent the Australians who served. The second garden will be centered by an oak tree that recognises England and the local oak trees planted throughout Berwick. Nine standard roses in a line will represent each of the fallen men. The third garden will feature a pine grown from the seeds of the Lone Pine Tree in Gallipoli and feature a Mediterranean garden recognising the Gallipoli Campaign.

The next step will be working with students, parents and staff from the School to draw up the plans and start building the garden. The memorial site will feature in future, ANZAC and Remembrance Day ceremonies.