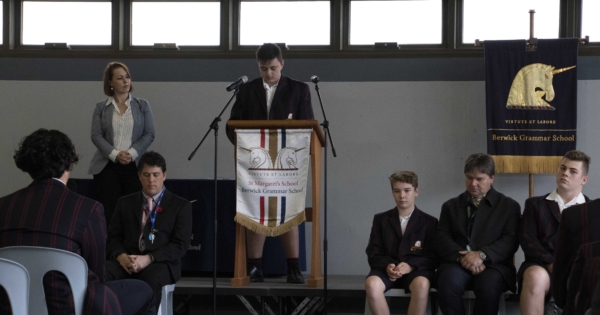 The ANZAC Prize invites students to reflect on what the spirit of the ANZACs means today by writing a story, poem or reflection.

This year we had a record number of entries, dominated by some very civically minded Year 7 students. The standard was so good that we could not choose between two entries, and so this year, two boys have been awarded the ANZAC Prize.

Jovan Gudelj wrote a powerful story capturing the terrible fate of many young men who lied about their age to go to war.  It is included for you to read below.

The high pitch noise ringed in my ears for what seemed like an eternity, my fallen comrades’ wide eyes stared at me. He looked sad and he wasn’t moving, tears started rolling down the side of my face. Why had I come here, to this hellhole they call Gallipoli?  I should never had lied and stayed home with my family. So naïve, so young and so very stupid. I was out of my league, I was a coward and a small little boy who thought he was a man.

What would my parents think of me? A liar and a dead one at that. I crawled up in a ball and covered my ears. The ringing stopped but not the yelling and the gunshots. I laid down and cried like a child, screaming for it to end. I covered my baggy coat over myself, so I was out of sight. I don’t know how long I stayed there for, but it was probably a while. I wondered what would happen when somebody found me, maybe they would let me go but that was just wishful thinking. I would probably be told to stand up or get on my knees and be shot in the head, or maybe they would make me suffer a slow, sufferable death. I pray that they end my life quickly so that my last breath may be quick and insufferable.

After a while my hearing was back to normal and there were no gunshots. Maybe they had stopped. I heard footsteps near me, they paused and then continued to walk around. They crept closer and closer, I closed my eyes and tried not to make sudden movements or breaths. Someone kicked my foot lightly and flipped me over with their foot. I opened my eyes to face the Turk. I spoke and pleaded for him to let me go and I promise I would leave this place and never come back. He stood behind me and forced me to stand up. He shushed me to silence. I heard his pistol cock behind me and the slow metal movements turn.