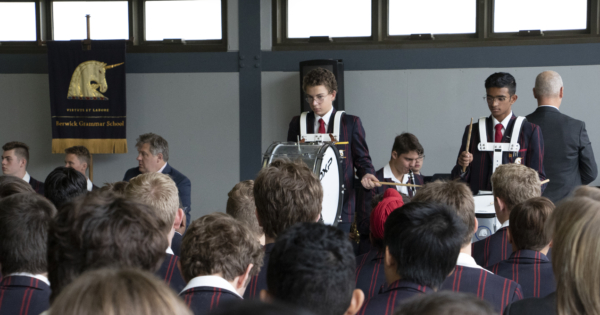 It was the powerful sound of the Drumline that stood out most at the Berwick Grammar School ANZAC Commemoration Assembly on 24 April.  The drumline, a key feature also of the local service and March, led the official party into the Performance Centre with a rousing processional.

Following this, a range of staff and student speakers worked to convey the respect and sadness for the fallen.  Mr Ron Ruzzier of the English Department told a story about the hardships many diggers faced after coming home, emphasizing the virtues of determination and steadfastness. He was followed by our keynote student speaker Tallis Pritchard of Year 7 who spoke about the contribution of Australians beyond Gallipoli.

After Mr Marten Visser provided some quiet reflection time with a beautiful version of ‘Abide With Me’ on the piano,  Mr Greg Ashcroft updated the school on the plans and progress of the Centenary Garden, for which he and a team of students were awarded funding last year.  This memorial project looks to recognize the contributions of Old Berwick Grammar School boys to previous wars, and will include a Lone Pine tree and a special plaque for the nine boys from our school who fell in WWI.

We then handed over to two students to read their award-winning pieces submitted for The ANZAC Prize – you can read each of these in their own campus news articles.  Congratulations to Krish Gupta and Jovan Gudelj in Year 7 who were both acknowledged here.

The assembly was rounded out by Trent Mitchell in Year 11 who read The Ode and Mr Mason who provided the solemn notes of ‘The Last Post’.

Many of these boys and other school leaders across year levels will also represent the school in the local march on Anzac Day.