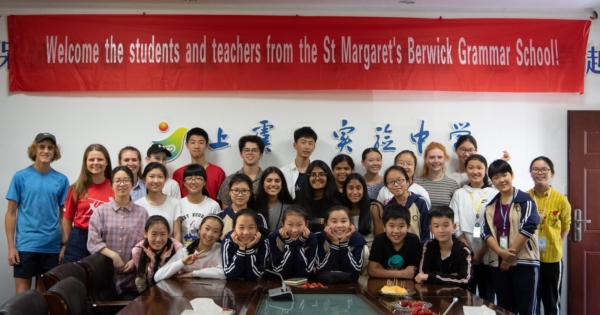 In April, Senior students from both campuses took part in a cultural exchange program to China.  The students visited Shanghai, Hangzhou and Shaoxing; three river cities within easy reach of each other on the east coast of China.  The students were in Shanghai over the busy Qing Ming festival and were able to experience China during one of its peak travel seasons.  There was a sea of people everywhere you turned on Nanjing Rd.  We toured the old and new of Shanghai visiting gardens as well as the Bund area taking a tour of the Pearl TV tower and an evening cruise along the Huang River.  Following Shanghai, the students caught a high speed train traveling at times up to 250km/hr to Shaoxing.  In Shaoxing, we have a sister school Shangyu Middle School.

In February this year students from Shangyu Middle School spent some time at BGS and some students instantly recognized each other and continued to establish their friendships.  This school looked after us and shared Shaoxing’s history and culture.  Our students were able to try their hands at “Qingci” pottery as well as a lesson on how to play the traditional pottery flute.  A highlight for many students was the basketball match they participated in at this school too.  The last major city we visited was Hangzhou.  Hangzhou was the capital of China during the Song Dynasty and is famous for the scenic spot West Lake.  Our students participated in a 4 night homestay program with students from Xuejun Middle School.  Host families included our students in their daily lives for two working days and then spent the weekend showcasing their city.

“Once in a lifetime school opportunity, it was one to remember and I would do it again if I had the chance. It was an eye opening experience to see and understand more about China and its culture.” B Mitchell

“I went to China and I fell in love with it.  You don’t have to be able to speak Chinese to go on this trip or to get around China yourself. The culture is inviting and the people are patient when you have to point to something, because you don’t know what the word is. We could explore China in its places you would not see in common tourist areas such as the streets where middle aged women dance with loud music together in front of their homes as a way of staying healthy and connected with their neighbours.

We all stayed with a Chinese family in Hangzhou for three days, who looked after us very well, making sure we were well fed, were warm enough and had no chance of getting sick. This was my personal favourite, because my homestay family I was able to experience what growing up in China would be like and my homestay family and I became quite close. I still talk to them in Australia.

We also visited schools in China where I met two young schoolboys who I spoke Chinese to. They turned to each other and proceeded to play ‘rock, paper, scissors’. The boy who lost turned to me and introduced themselves to me in English. This memory along with the memories of many children who would speak to us in English and then would often start to giggle and run away will always stay with me. It has taught me how fortunate we are to see so many people from around the world and being able to listen to their stories, just as the children whose smiles would appear when we spoke to them. No amount of money could pay for the trip that we went on, because it is definitely worth more than what we paid.”