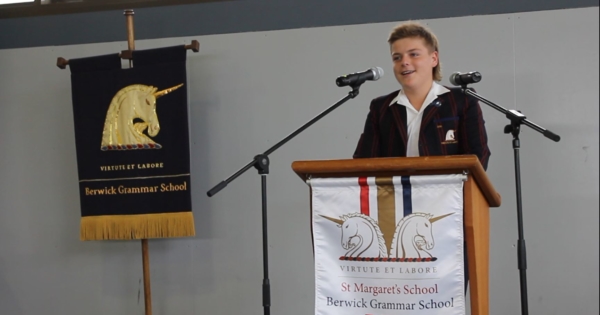 The annual Berwick Grammar School House Public Speaking competition was held on Monday 29 October. Hosted by Matthew Kent, and with the assistance of Ms Vrakatselis and Mr Howard with timing restrictions, the audience was informed and entertained as their peers spoke about issues and topics they were interested in or felt strongly about. Some of these included whether Japan should resume commercial whaling, the advantages of safe injecting rooms, whether we are ready for artificial intelligence and the benefits of having a mullet.

Congratulations to all boys that spoke, in particular the following boys that were awarded Best Speaker in their respective categories:

Ovin was also awarded the Best Overall Speaker, with his speech on Artificial Intellegence, and Dylan Hor (Year 10, Forsyth) was acknowledged with an Encouragement Award.

Once again, Forsyth proved to be undefeatable and claimed the House Public Speaking title for the tenth consecutive year, with Richards second and Battye, third.